Happy Easter everyone, I hope you all had a great weekend!

It has certainly been a great one for all of us at The Hoxton Special as we had the wonderful guys from Stryder Kiteboards come down to visit us and show off their swanky new 2017 boards. 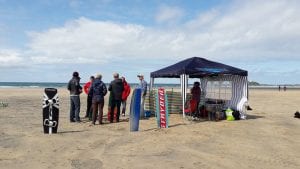 So the plan was simple, take advantage of the Easter weekend to show off Stryders amazing range of boards and have a great time doing it. We had two stunning days down at Gwithian Beach with sunny blue skies and a small westerly wind. Early Friday morning with everything packed everything into the two cars and we traveled up the dreaded Penzance bypass, headed windward. It always seems like a small amount of gear when its in the back of my tiny Vauxhall Corsa, that is until  it all comes out at the other end and you are forced to run up and down a cliff face with it multiple times!. We set the tent up just by the low tide mark to the south of the life guard hut, popped the tea on the stove and got ready for the day. 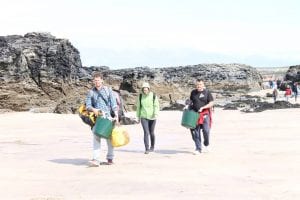 As the wind slowly filled in, a few curious kite surfers came to peruse the new boards, and as the crowds slowly built beach goers started to take us up on a free intro to power kiting. Goon helmets on, we ventured out into the sandy expanse with the mighty Peter Lynn Skim. 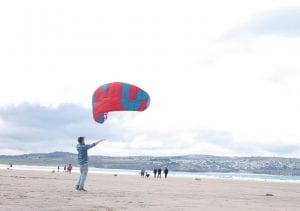 As the day progressed the wind picked up a little more and we all managed to get out on the big kites. I was hammering up wind (in about 8 knots) on the new Stryder Genesis, having borrowed a friends Ozone Chrono (which is a beast as well!)

On the second day we lit the BBQ. Sausage baps and cups of tea in hand we were ready for round two. During the first few quiet moments my sister (Intern and Assistant Extraordinaire) took the initiative to get her hands on some much sought after tuition form The Hoxton Special. 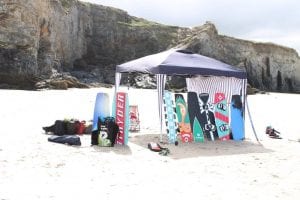 “Can you teach me to fly a kite?” She asked.

[As I thrust the Kite into her hands.] 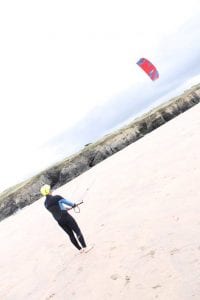 Later the wind filled in even more, and a few hopeful riders headed out to try the Stryder Halo and Sigma.

The Bit where I try and convince you that Stryder are the best boards I have ever ridden.

After ripping the rail out of my North Gambler, snapping the nose off my Cabrihna Custom, popping the inserts out of my Liquid Force (Something-or-other) I was starting to get fed up with the fact that these boards weren’t taking the pressures i put them through. Pretty soon my only criteria for buying a board was.. “Can it take a beating?” Fed up with boards lasting me around six months I did a bit of interweb fanadangaling and stumbled across this lunatic that said he had built some of the sturdiest boards ever created, he even said they came with a three year warranty.

I thought. “He’s definitely going to regret this.”

So I grabbed my Sigma and I have to say, not only is it solid as a rock, but it looks great, flies up wind even in marginal conditions. WITHOUT FINS.

I get it, not everyone has a penchant for jumping into solid objects at high speeds. Not everyone needs a finless, aluminium tipped beast that attacks tricks and chop like Chuck Norris on an amphetamine high, but for those that do I would suggest no other board. 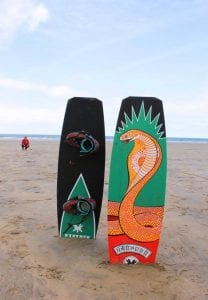 For those people looking for something a little more user friendly but still with the same build quality and excellent design The Halo and The Genesis are well worth a look. The Genesis is now my preferred teaching board, big stable and great in light winds, it’s really forgiving and makes a great ride.

At the end of the second day, after a great light wind session and many smiling faces, we all began to pack up as the tide started to chase us up the beach. Halfway through packing up my sister scampered over and told me off for leaving her with the kite. Turns out she was such a natural, as she managed to keep it flying all this time, the only problem being that she didn’t know how to land it!

After two days of sun, wind, epic boards and great company we collapse onto the sofa with a cup of tea and a biscuit each.

“Thanks for the photos Fenella.”

“No problem, at least we can have a day off tomorrow.” 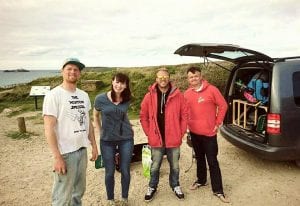 Thanks guys, we’ll see you next year!

Kitesurfing Boat Rescue – How to rescue a kite surfer The Summer Season is here!